So our lovely Jojo was flicking around on the internet at home one evening and she came across something she really liked……..she shared this with our closed FB group and our staff and parents were inspired and so a crazy idea was created!!!!! 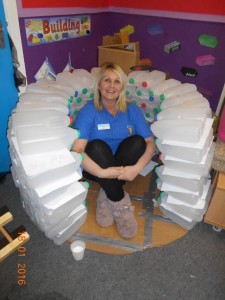 Over the next few months we guzzled our milk at home and Jollies, but instead of popping the four pinters into our recycling wheelie bins we washed them out and passed them nursery’s way. James cleared a space in the cellar and operation ‘crazy collection’ began!!!!!

The bottles piled higher and higher and the excitement grew and grew. Jo started the mammoth building task and it wasn’t easy – the glue gun was messy, the pva and paper layer (recommended by a local school) was sticky and the structure was unstable and awkward…..

Building an igloo felt like climbing a mountain and then poor Jo had to abandon mission due to an operation. So Sian stepped up to the challenge!Armed with industrial glue gun and bucket of watered down pva and paper for added stability ( the snow between the icy blocks) the big build continued.

So two days later, we have an icy palace, fairy lights twinkle above and the floor is a shiny/crinkly silver. We plan to add snow and ice and all things nice so wintery stories can be shared in there. We hope lots of fun, creativity and icy imagination will be had in our jolly igloo. (we also hope Jo approves and wish her a speedy recovery!) x