On Thursday 16 June 2016 we had an afternoon tea party at nursery to celebrate the Queen’s 90th birthday.  We decided to hold our celebrations after the official events had occurred over the weekend as we hoped that this would make it all the more meaningful for our children as many would hopefully have watched (and chatted about) some of the things occurring and how this was a very special birthday.  On this day everyone came in wearing red, white and blue and they all looked fabulous!

Our party had a double focus as it was a Queen’s afternoon tea combined with a footie party!!  England were playing Wales and we wanted to cheer on the teams and get sporty too.  We had goalposts around the area, we kicked and passed balls, we lined up and did a celebratory conga outside cheering our support for the teams as we listened to the commentary live on the radio.  Our children had a mixture of crowns and flags painted on their faces as we all got into the royal/footie spirit.

We congregated in our garden area together under red, white and blue bunting and sat on our royal blankets as we had our afternoon tea party.  We had sandwiches (not cucumber ones!!), carrot and cucumber sticks, slices of pizza, sausage rolls, crisps, fruit and cakes – it was a party after all!  We sang ‘Happy Birthday Your Majesty’ and chatted happily together with our friends.

The most marvellous thing was that the sun shone down on us just as we were all eating and this was entirely unexpected as thunderstorms were predicted.  It was a lovely afternoon as we celebrated together in the sunshine…  Thank you to all our children, parents/carers and staff team for all your support.  You looked terrific and all made such an effort on this special day as you took part in the wide range of activities that were occurring.  We even had our very own Jolly Queen as Megan opted to dress not in red, white and blue, but as Her Majesty herself… 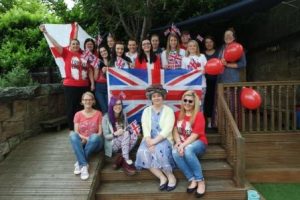 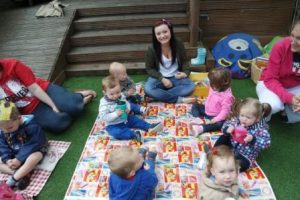 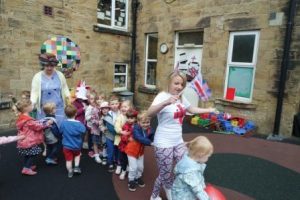 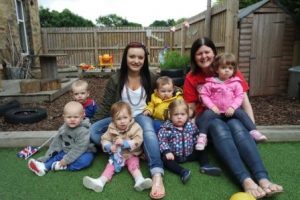 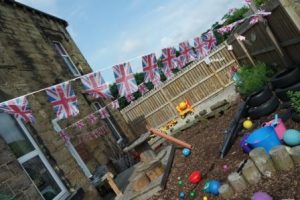